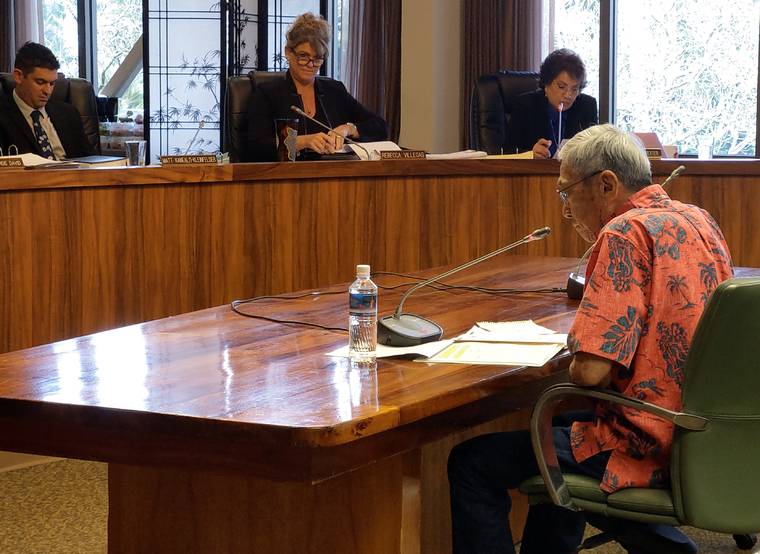 After almost six hours of testimony and debate Wednesday, the County Council came up one vote short of overriding Mayor Harry Kim’s veto of a bill banning the use of herbicides by county workers.

The council needed six votes to override Kim’s veto of Bill 101. That super-majority failed when Puna Councilwoman Ashley Kierkiewicz, who had originally voted yes with reservations on the bill, switched to a no vote on the override, saying her concerns about the language in the bill were underlined by Kim’s veto message.

“Your decision made me look a little bit closer,” Kierkiewicz told the mayor. “We’re coming to find out now that there were opportunities that were missed, including hitting the pause button.”

Testimony ranged from the objective to the emotional as scientists, physicians, conventional and organic farmers, beekeepers, flower growers, former public officials and everyday citizens weighed in, most choosing from the wealth of available research to make their often contrary points.

Proponents of the ban pointed to dangers in toxic herbicides, especially for children.

“The Hawaii Chapter of the American Academy of Pediatrics applauds the County Council for passing Bill 101 the first time and hopes that enough votes will be generated to override the mayor’s veto,” said Michael Ching, president of the group, in a letter Monday. “Our children should not be playing in parks that have been sprayed with pesticides.”

“I’m sad that the mayor doesn’t have my child’s back,” said testifier Jenny Bach.

“We are asking to not put toxins where our children play, where people walk and where our workers work,” said James Weatherford. “Hawaii County is late to the game on this.”

Kim said his veto had nothing to do with a lack of concern about children or the environment, or a concern with money, as some testifiers intimated.

“I resent that,” Kim said. “I’m very disappointed in some of the statements made in regard to our veto.”

The mayor clarified after the vote that he continues with his plan to create a committee to determine ways to cut back on herbicide use and find earth-friendly alternatives.

Two county departments — Public Works and Parks and Recreation — said they’ve already cut their herbicide use by half. In addition, four parks have been selected for pilot projects that involve the cessation of herbicide use: Hilo soccer field No. 4, Old Kona Airport Park football field, Waikoloa Park and Pahoa District Park.

Chung also didn’t want to be painted as opposed to the concept of the bill; he just had problems with some of the details.

“I’m not against children or bees or anything else, I’m for good legislation,” Chung said.

Opponents of the bill worried about the financial impact of increased manpower and the carbon impact of increased mowing machinery, as well as the precedent set they feared could lead to a ban that also affects the private sector. Herbicides are one of several vegetation management tools needed on the island, they said.

“There is no evidence of any harm when used as directed,” said Lukas Kambic, a biologist with the Research Corporation of the University of Hawaii. “The dose makes the poison.”

“Bill 101 is not based on facts or data. …This bill is a knee-jerk reaction to an anti-pesticide lobbying group,” said Cabral. “How much is this going to cost? Where is the money going to come from? Are we going to pay more taxes?”

More than 50 testifiers supported the override, while eight people opposed.

“They’re both listening to whoever they want to listen to,” noted Chung. “I have the impression no one’s listening to the other side.”

“We’ve been asked by the people of this county to change the way we treat our open spaces and our public places,” Villegas said. “This is a good law, this is a fair law, this is a just law.”

Villegas said the science proves that herbicides are toxic and cause harm.

The freshman councilwoman bristled at comments from the mayor and some fellow council members that the bill was developed without sufficient community input and that it had flaws that should have been addressed before the legislation was passed. Villegas characterized the mayor’s comments as “manini concerns.”

It’s unknown how much a transition to other forms of weed control would cost.

Parks and Recreation Director Roxcie Waltjen estimated she’d need 400 additional park maintenance workers at about $39,000 salaries to pull weeds and keep the 183 parks at their current condition. The Department of Public Works wants to hire a consultant to help determine how much it would cost to do the same for roadways.

“It’s about the dollar; it’s not about kokua the next generation,” said Olivia Ling, testifying from Naalehu. “If you guys choose the dollar over life, that’s on you.”

Former North Kona Councilman Kelly Greenwell had mixed emotions. On the one hand, Greenwell, a farmer, said, he’s concerned about the precedent that could lead to an islandwide herbicide ban based on “emotionalism based on false information.”

“If we follow this slippery slope far enough, what we’re going to find is all our food will be produced in foreign countries,” Greenwell said.