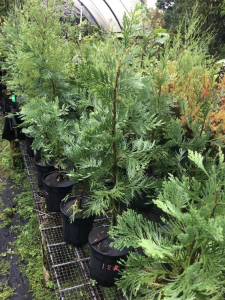 Courtesy of AILEEN YEH A potted Leyland cypress, grown at a private nursery.

MICHAEL BESTOVANSKY/Tribune-Herald Several species of potted trees, no more than 2 years old, on display during Wednesday’s meeting of the Hawaii Farm Bureau.

After five years of growing, an ongoing project to establish a Christmas tree farming industry on the Big Island is closer than ever to completion.

The Aina Mauna Christmas Tree Demonstration Project has planted several different species of coniferous trees at locations around the island in the hopes of reducing the island’s reliance on importing the holiday trees from the mainland or elsewhere.

“We all saw the headlines about this little guy,” said Hawaii Agricultural Research Center horticulturist Aileen Yeh during a meeting of the Hawaii Farm Bureau on Wednesday, showing an image of a foot-long alligator lizard recently found on an imported Christmas tree in Hilo.

In order to avoid unwanted passengers such as the lizard, the Hawaii Forest Institute began the project in 2014, planting its first batch of Douglas firs on a remote Maunakea hillside, a location that has complicated the project somewhat. Yeh said the remoteness of the site has made it nigh-inaccessible during less-than-clement weather, so regularly monitoring the health of the trees is difficult.

Last year, the project expanded to include 31 total tree species at several sites at lower altitudes. Some of those species thrived better than others, although Yeh said the project learned the hard way that trees planted in the ground must be fenced off to avoid being destroyed by wild pigs.

In 2019, Yeh said the scope of the project has not expanded further, but is refining its understanding of which species thrive in which of the island’s microclimates — and, most crucially, which species are the most popular as Christmas trees.

Yeh said some of the species that thrive the best at lower altitudes include the Italian and Swiss stone pines, the Mexican and Port Orford cypresses and the Leyland cypress, which she said are all able to grow relatively quickly compared to the higher-altitude species. However, she added, many people seem to favor species of fir for Christmas trees because of their distinctive smell.

Some of the first batch of Douglas firs are more than 5 feet tall now, Yeh said, but their growth was slowed by poor soil conditions and the lack of regular maintenance. Other non-fir species at lower altitudes have grown more steadily, and Yeh estimated some of them could be harvestable in two or more years.

People also are able to purchase potted trees from the Department of Forestry and Wildlife or private nurseries, although Yeh said interested parties will be put on waiting lists. Yeh said she could not provide specific advice for raising specific tree species, as the climate of Hawaii changes too significantly from place to place.

“We have all these microclimates around here,” Yeh said. “I don’t want to tell anyone how to grow one species in one place and they find out it isn’t right for another place.”

While Yeh said she will continue to care for the already-planted trees in 2020, the future of the project is not immediately clear. The project’s state funding through the Department of Agriculture ends this year and it is uncertain whether it will be renewed.

Heather Simmons, executive director for the Hawaii Forest Institute, said her agency will release a final report on the project by the end of January 2020 and decide how to proceed from there.